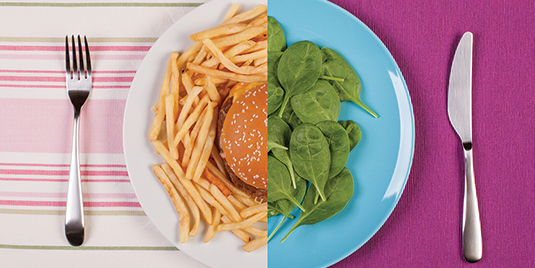 Does your diet plan match your personal metabolism? As with managing your bipolar disorder, finding a winning strategy to lose weight takes trial and error.

Staying at, or making progress toward, a healthy weight does all kinds of good things for physical well-being and self-image. Yet as the staggering statistics on obesity and overweight make clear—from half to two-thirds of adults in North America qualify—that’s not always an easy thing to do.

Here’s an idea that might help: Think about managing your weight the way you successfully manage bipolar disorder—by trying different strategies to see what works best for you.

The latest research indicates there’s no one-size-fits-all solution (no pun intended). Limiting carbs may work for one person, but not so well for another. Some people can have small portions of dessert and stick to a diet plan; others find that they can’t have anything sugary without overindulging.

As Time magazine reported earlier this year, scientists who study obesity are finding that food plans for weight loss need to be personalized.  Data compiled over 23 years from the National Weight Control Registry—a research project that enrolls people who have lost at least 30 pounds and kept it off for at least a year—shows that most participants kept trying different approaches before finding one that produced long-term success.

Some other common themes: eating breakfast every day, tracking progress with weigh-ins at least once a week, and regular exercise (about an hour a day, on average).

No matter what strategy you finally adopt, your winning game plan will need to address some of the particular challenges of living with bipolar.

For starters, says Jennifer R., 52, of Bastrop, Texas., “there’s the depression, which makes me feel worthless and not care about my health or appearance.”

“Patients with atypical depressive symptoms may have increased appetite and eat more,” says Calkin, an assistant professor at Dalhousie University and medical director of the mood and metabolism program there. Her research specializes in obesity, diabetes and insulin resistance in people with bipolar.

“They sleep more, and spend more time in bed and on the couch,” she adds. “It’s very hard when you’re depressed to have the energy to actually exercise and eat properly.”

Sound discouraging? The key is to not throw in the towel when pursuing a healthy weight gets frustrating, but to keep exploring lifestyle and eating changes that will help you shed pounds—or keep from adding them. Here are some some important options to consider:

1. Replace rather than restrict

Although “low-carb” diets are popular, they’re hard to maintain over the long term. Instead of trying to eliminate carbs, think about choosing more strategically.

“You don’t want to take out all carbohydrates because that can leave you feeling unwell,” says Angela Lemond, a registered dietitian nutritionist (RDN) in Plano, Texas, and a spokeswoman for the Academy of Nutrition and Dietetics. “But … having a budget for carbs can help you decide how to spend them and help you make better choices.”

Lemond talks in terms of a proper “dose” of carbohydrates, which would be around 40 to 60 grams per meal.

Jennifer says between her moods and some of her medications, she often has cravings for simple carbs. “Those are really hard to resist, especially when I have a bad day,” notes the 52-year-old.

The goal here is to shift your food choices toward “complex carbs,” which provide a slower and more sustained energy boost, are generally higher in fiber, and tend to be more nutritious.

With starches like bread, pasta and rice, try to cultivate a taste for whole-grain options. Even snack foods can be lower in sugar, fat or salt—baked pita chips instead of greasy potato chips, for example. Or experiment with more wholesome alternatives like popcorn or roasted chickpeas.

Keeping a food journal is a proven way of aiding with weight loss. It’s even easier when you use a smartphone app to tally what you eat and how active you are.

Jennifer says the app she uses helps, “as long as I’m brutally honest with myself and enter everything I eat. I keep track of calories, carbs, fat, protein, exercise, and weight. It helps to see that weight line go down and to have the estimate of what my weight might be if I keep eating like I did that day.”

Counting calories works for many people, but Jim F. of Charlotte, North Carolina, has had more success with a “macro” diet (short for “macronutrient”) . The macro approach establishes a set daily amount of protein, healthy carbs, and fat. (For Jim, that’s 177 g protein,  225 g carbs, and 56 g fat).

Jim lost about 15 pounds over four months by working within his marco parameters, and has maintained his current weight for more than a year.

“Before I started doing this, I was eating way too much fat and way too many carbohydrates,” says Jim, 49. “I still eat a lot of fruit, but I eat fruit like melon, which is lower in carbs but still filling … and I eat a lot of leafy greens and broccoli and lower-fat sources of protein.”

Scientists are now telling us that exercise alone won’t result in weight loss. However, physical activity consumes calories, can build muscle mass (which burns more calories than fat cells even when the body’s at rest), and not least, improves mood and aids in managing bipolar symptoms—which in turn can make it easier to stick with healthy lifestyle choices.

“Exercise has been a huge part of helping me stay relatively stable in the 10 years since I’ve been diagnosed, especially on the days I’m depressed,” says Fagan, who works out five to six times a week. “Sometimes a really hard workout can help pull me out of that fog.”

You needn’t be training for a marathon to benefit, though. It helps just to grab a pedometer and up your daily steps. And shoot for two days a week of strength training to build muscle tissue, which boosts metabolism.

Do you tend to skimp on food during the day, only to binge at night? That makes it harder to lose weight or keep it off. Eating smaller meals more frequently will help you maintain steadier energy and blood sugar levels, which means you’re less likely to overeat at any given time.

“Four or five small meals a day and eating protein throughout the day are also very important. This helps maintain blood sugar in a healthy range, and manage insulin,” says Calkin.

The last thing you want to do is skip meals.

“Fasting tells the body you’re starving,” Calkin says. “If you’re eating more frequently, your brain knows you’re going to eat again in two to three hours and it tends to ramp up metabolism some.”

It may sound counterintuitive, but you can lose weight by eating more—more produce, that is. The average American typically consumes just one serving of fruit and one serving of vegetables each day, says Angel Planells, RDN, a spokesman for the Academy of Nutrition and Dietetics who practices in Seattle.

Start by adding at least one fruit or veggie to every meal. Slice a banana or sprinkle fresh berries over your morning cereal, or saute onions and bell peppers to mix into scrambled eggs. Top a lunchtime sandwich with tomatoes, sliced cucumbers, and lettuce. Steam a side of frozen veggies to go with your dinner.  For snacks, think an apple and a handful of nuts, or crunchy carrot sticks with low-fat dip.

“The Ben Franklin quote comes to mind—‘Failure to plan is planning to fail,’” says Planells. “If you plan out your day, you have a better chance of being successful.”

A little prep work can avert a visit to the vending machine (bring lunch from home instead) or a detour through the nearest drive-through (roast a chicken or cook up a pot of soup on the weekend, ready to throw together for a quick dinner another day).

Caroline N., 45, of Montreal, lets a store employee do her prep work.

“We often buy large containers of fruit and vegetables that are already cut,” Caroline explains, adding: “The kids love the snacks that are fresh and cool and we love the convenience. They’re ready for salads or for cooking and for a quick bite.”

Don’t discount the “see it and eat it” power of keeping a bowl of fruit on the counter or a veggie tray in the fridge. In Caroline’s household, “the tray is very visible on the bottom shelf and bright colors scream, ‘Eat me!’”

Too often, we’re shoveling down food on autopilot. Caroline embraces a “slow food” approach that starts with thoughtful meal preparation, like assembling a salad with different vegetables, lettuces, and creative ingredients such as edible flowers to increase the pleasure factor.

“When you eat a fast-food burger, you don’t even feel like you know what you’re eating,” she says. “You can…make [healthy] food beautiful, and it’s not expensive.”

Approaching what’s on your plate with deliberation and appreciation—also known as mindful eating—makes you more likely to eat slowly and stop before you overeat.

You needn’t be a gourmet to embrace this idea. You should, however, make sure all devices are put away and the TV or radio is silent. Starting with a simple green salad and a glass of water gives you a chance to ease into the meal while also sating your appetite a bit before the entrée.

9. Think about the bigger picture

A rigid or obsessive attitude toward what you see on the scale isn’t likely to work in the long run, warns Lemond. Instead of a “diet mentality,” she says, think in terms of a deeper reason to keep you inspired. Some examples: wanting to improve how you feel day-to-day, having more energy, or knowing that you are taking care of your health.

BMI: Overweight or Obese—What’s in a name?

The terms “overweight” and “obese” have specific medical meanings, based on an individual’s body mass index (a calculation involving weight divided by height). Having a BMI of 25 to 30 puts you in the overweight category. If your BMI is over 30, you’re considered obsese.

There’s some debate over how accurately BMI reflects your health status, since it doesn’t distinguish what proportion of your weight is fat versus muscle. However, it’s a rule of thumb that the greater your BMI, the more likely you are to be at risk for diabetes, high blood pressure, and heart disease.

Good sleep may be a prerequisite for weight management: A British study published July 27 in the journal PLOS ONE found that people who slept around six hours a night tended to be heavier and have a larger waistline than those who slept nine hours a night.