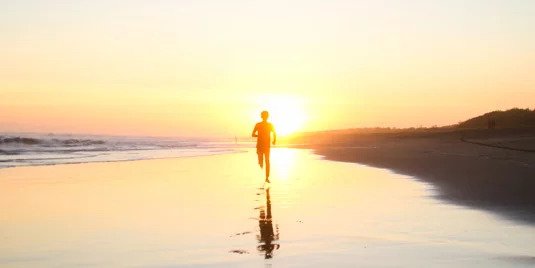 Research shows that physical exercise can benefit one’s mental health. But there are other advantages to challenging oneself in this manner.

You’re probably thinking, “Oh, here we go again. Another post that is going to tell me to exercise.” Well, you’re right, a bit. You see, research has proven that exercise improves one’s mental health and is a good adjunct to traditional therapies. I don’t think that there is much disagreement with this. But what I’m talking about is actual physical fitness.

To further explain, I want to make the connection between physical activity and bipolar disorder in a more metaphorical sense.

For the last roughly 20 years I’ve engaged in endurance sports like long-distance running and cycling. I’ve successfully completed two full marathons, three half-marathons, and countless shorter-distance races like 5Ks and 10Ks. In the last few years, I had to drop the running due to lower back issues; however, I’ve replaced it with cycling. I typically ride anywhere between 20 and 40 miles, and even longer distances when in training. Last summer, I participated in a 102-mile fundraising ride, which was as much a “bucket list” thing to do as anything else.

I don’t share these accomplishments to brag. If anything, I’m just expressing how much my life has revolved around these types of activities.

The thing to keep in mind is that there have been times in my life when I literally couldn’t get out of bed. If you’ve ever had this experience, then you know what I’m talking about. But this is where the connection between physical fitness and bipolar comes in.

With our condition, when we’re in the midst of mania, anything is possible. The energy we experience is virtually unlimited. If only it were possible to bottle this energy and be able to take a sip every once in a while to keep us going then everything would be great. Unfortunately, this isn’t possible.

On the other end of the spectrum, when one is having a depressive episode, it is horribly challenging even to get dressed.

What I have learned over the course of my 37 years of living with bipolar is that our condition is fatiguing. Not just in the sense of the depression that it is associated with it, but the simple idea that we have to endure the ups, downs, and in-betweens of the condition. And this is where the metaphor comes in.

You see, life is a marathon, not a sprint. It is so important to recognize that despite how hard things can get, recovery is possible, and we have to hold on to this hope one day at a time.

It was 1999, and I was running in the Marine Corps Marathon in Washington, DC. I was able to participate in this legendary event as a result of raising funds for the Leukemia and Lymphoma Society. It was a cold October day, perfect to run 26.2 miles. Ever since my days running cross-country in high school, I had dreamed of completing a marathon.

1999 is a long time ago, and many of the memories are tucked in the corners of my subconscious. But there are some images that stand out: the throngs of people lining the streets in Georgetown, the Marines in full gear running the distance, and those individuals who carried our nation’s flag while, at the same time, running as I was.

But one memory that sticks out is that of the 14th Street Bridge. This is approximately 20–21 miles into the race. I recall running up the bridge and beginning to struggle. Then I looked to my right and saw a person walking, and I literally said to myself, “That looks like a good idea.” So, I did just that.

Knowing that I was only 6 or so miles from the finish was enough to keep me moving. I ran with intermittent walking breaks. HOWEVER … I didn’t quit. I kept my focus on the goal: to finish, one way or another.

As I made my way to the finish line at the Marine Corps Memorial, I had an incredible sense of accomplishment. Runners actually complete the race by running up a steep embankment. Once you cross the line, a Marine puts the finisher’s medal on you.

The comparison I would make between the challenge of running one of the most storied endurance events of all time and having bipolar is that no matter what, we have to remain focused on our goals, whatever they may be. Whether it’s returning to work, getting out of the house to go shopping, or simply taking a shower, being able to tap into the reserve that lies within is crucial. By doing so, we give a much-need boost to our self-esteem.

In 1981, when I emerged from the first of the many manic episodes that followed, I never in my wildest dreams imagined that I’d be able to accomplish many of the things I have in the years since. One thing I do know, though, is that it takes equal measures of work, hope, and belief to make it all come together.

So, challenge yourself. What is your goal, and how can you make it a reality? Feel free to leave a comment on something you’ve done or would like to do.